TURNING POINT is an intense character driven thriller and a close study in survival. Set in the Australian outback, it tells the story of a hunting accident and the subsequent events that follow. 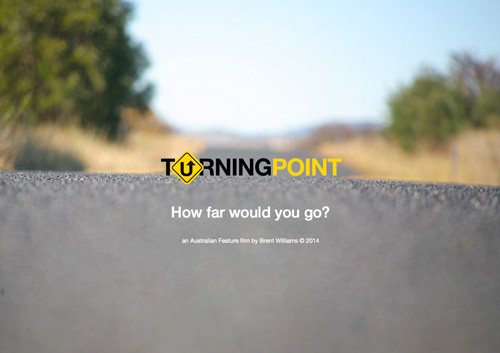 Turning Point: A moment in time at which decisive change occurs.

At the edge of the wild, all rules change

TURNING POINT is an intense character driven thriller and a close study in survival. Set in the Australian outback, it tells the story of a hunting accident and the subsequent events that follow.

For Claire Foreman and best friend Stella Diamond, two days in the country seems like the perfect get-away. For country singing sensation Grahame Bones and his brother Cooper, it is an escape of a different kind. But a chance encounter in the bush will change their lives forever – if they survive…

TURNING POINT is a film about ordinary people caught up in an extraordinary circumstance where the normal rules no longer apply. How civilized is any one of us, when the restraints are removed, and all we hold dearest is at stake?

Set deep in the Australian bush, it is a study in survival – physical, mental… and spiritual. I came up with the idea for Turning Point while reflecting on an episode of “Unsolved Mysteries” I watched when I was a kid. Asking myself the question “what would I do if I accidentally shot someone in the bush?” was the initial creative spark for this story about ordinary people caught up in an extraordinary situation.

This is a character driven piece, with the performances being of the utmost priority to achieve my vision. I will be looking to cast strong actors and allow each of them to explore backstory and dialogue so that they embody the characters in full. With this in mind I feel it necessary to do as much workshopping as possible, especially for the “Graham Bones” character so that each actor finds the truth in their character.

I am very conscious that I want the bush to feature as an additional character. I feel that the scenery and landscape will aid in establishing the tone of each scene. I will be looking to show off the beauty of the bush in the 1st Act and slowly pulling that back as we progress through the next 2 Acts.

Given our locations and the performance expected from the actors I want to have a very small amount of crew on set. I feel this will be important in creating the space for the actors to shine and also will make for a very tight nit team.

We will be shooting with a Red Epic Dragon which will allow us to move fast on set and also give space for multiple takes. More importantly that that is the unrivalled detail and native exposure that is important for us to show off the bush as an additional character. We will be looking to shoot a lot of atmospheric scenes that will add to the overall tone of the film. Shooting with the Red Epic Dragon gives us great flexibility and terrific performance in this area.

Overall I am aiming to create a very intense Drama/Thriller with clearly defined characters and a strong story. I believe the themes of family, loyalty, self preservation, sacrifice and friendship will all shine through and ultimately resonate with audiences. 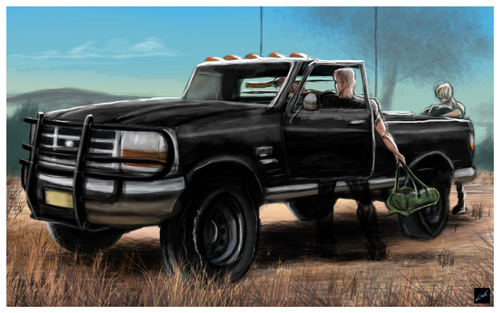 The look and feel of Turning Point is broken up into two distinctive parts. In the first act of the movie we present a normal portrait of life, slowly unraveling all it’s complexities and dynamics. The second and third Act is a time of confusion and high drama. The unique element of this film is to allow changes in the weather to subtly narrate this film…

In the suburbs of Tasmania, we will utilize the very natural feel of window light touching the characters. The camera work will be subtle and objective, allowing the viewers to navigate their way through dynamics of the characters. This will also give the viewer a sense of a familiar circumstance whilst gifting the viewer subtle insights into what may or may not lie ahead.

The idea of shooting this film in the wilderness of Tasmania is a decision that extends beyond just visual beauty. It’s about utilizing the sudden changes in weather with the mood and emotions it conveys. As much as possible, we would like to use the environment as a guide to the mood and subtext of the story.

An example of this may be when the girls meet the boys at their camp, everything seems pleasant, like old friends catching up, until the winds pick up and unsettles the conversation. At this point we are introducing cues via the weather. The next day, when the girls are alone, walking through the bush the light will be clean & warm, the natural environment will be singing it’s gentle tune.

In the second and third act of the film, once the characters are revealed we will be shooting at night, to keep the viewer locked into the drama and intensity of the situation. The camera movements will be handheld with fast paced steady-cam shots, allowing the viewer to see a certain point of view. Here we take the viewer into an objective view of the drama following the characters every move, the cold, the disorientation and the fear.

The tools for telling this story will involve the weather, camera movement and quality of light. All these primal elements will be utilised to tap into the subconscious of the viewer. This will mean working to the weather conditions, but being a smaller flexible production, we can afford to use this flexibility as a strength.

An example of using the light and mood of nature can been seen in Terence Malik’s film “Days of heaven” and most recently “Tree of life”.

The camera moves will consist of flowing steady-cam shots, in and around the trees and macro shooting of microcosms as they wander through nature. 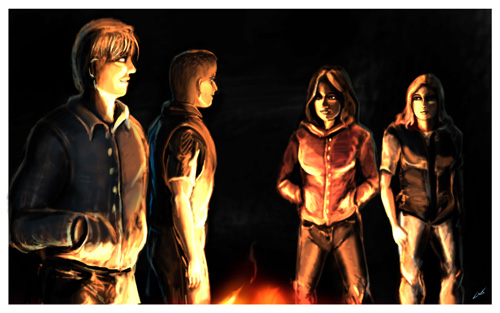 In the aim to keep the viewer engaged in the story line and represent the song lines we live, we will embark on long rehearsed shots much like those in “Children Of Men”. Allowing the actors to come in and out of frame, highlighting key subtext, taking the viewer on a journey and keeping them engaged. These shots are also handy for revealing critical moments and deceptions in the storyline.

In the wilderness, the shots will start to shorten, from the longer rehearsed shots, revealing elements of the characters then retreating to the wider shots.

In the dark chase scenes the film will be fast paced and disorientating, allowing the viewer to feel the fear of the chase.

These shots will comprise of objective views of the chase to tight glimpses of emotion.

In relation to the early sections of the film, at the house we will use widow light to tell the story. To the untrained eye this will seem like beautiful natural window light but
in fact the location will be selected based on this requirement. The window light will be aided with lights and controlled where needed. This was done very well on “The assignation of Jesse James”.